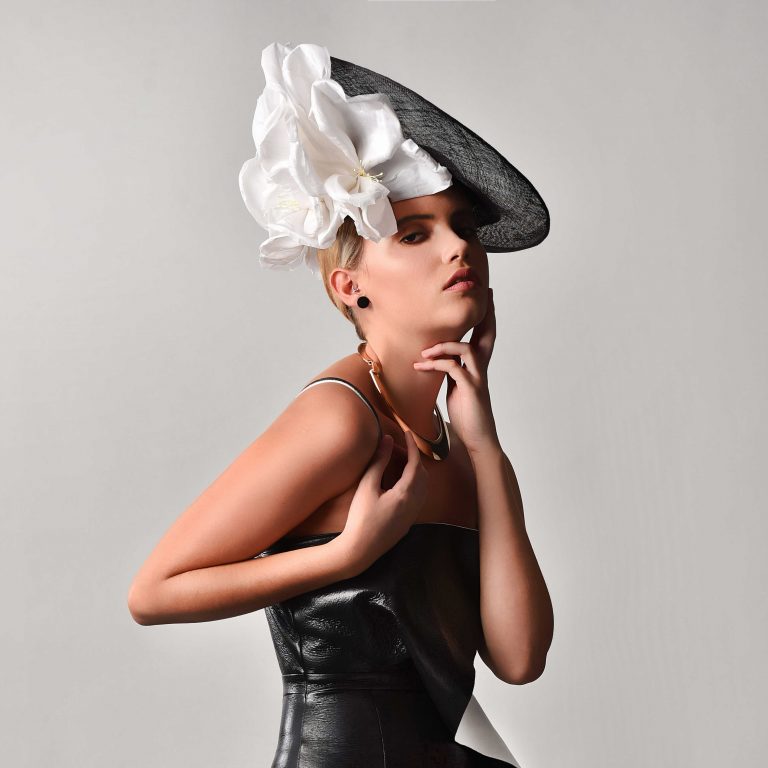 As Royal Ascot comes to a close, fresh on the scene, award winning British milliner, Elise Gustilo, is ramping up to get ready for Pure London SS19. Held from 22nd - 24th July, Pure London has built a reputation for being the top trade show when it comes to inspiration and buying in fashion.

Pure London organisers, Ascential Events, have offered Elise a complimentary stand to showcase, spotlighting the young designer’s talent. Building upon a successful career in fashion – including designing uniforms for London’s prestigious 5* hotels and working in luxury womenswear for Haute Couture House Ralph & Russo – Elise has been a prime candidate for attracting support since starting her business in 2018.

Before and after launching, Elise has received tremendous support from The Prince’s Trust, who are the official charity partner of Ascential. Working closely with a mentor through their Enterprise Programme, she was also awarded a place on the Cockpit Arts/The Prince’s Trust Creative Careers Programme 2017, granting her a studio space and craft specific support at Cockpit Arts. Enterprise Programme Executive, Stuart Taylor, says, “Elise started on The Prince’s Trust Enterprise programme with a clear vision of what she wanted to achieve. Her work is at the highest end of the market and I expect to see her achieve great things.”

When choosing to focus her fashion career on millinery, Elise was trained using traditional techniques by the legendary Rose Cory, Royal Warrant Holder to the late Queen Elizabeth the Queen Mother. Her initial collection – Seven – inspired by the 007 classic ‘From Russia with Love’, has had great interest and generated her first commission from Michelin Starred restauranteur, David Moore. Himself a trustee of Cockpit Arts, he spotted Elise’s exhibition at an Open Studios event and was quick to commission a hat for himself.

Most recently, Elise is gaining accolade for her contemporary creations, including winning the Commercial Appeal Award in the Feltmakers Design Competition. This piece was on display during London Craft Week and commercial appeal is exactly what Elise is going for, “I want to create hats and headpieces that are wearable art, designed to make a statement in a stylish way that makes the wearer feel unique and confident. I want to enable people to have fun expressing their personality through headwear.”

Elise can be found at stand V149 in the Accessories Concept area at Pure London. This is a new area, launched last season and growing rapidly.

Elise Gustilo is an Award Winning Millinery Designer creating exquisite, handmade hats & headpieces for shows, weddings and special occasions. Her creations are for those looking to purchase luxury headwear. Every hat is made-to-order and is available from one of Elise’s collections or through her bespoke design and creation service. Individual commissions and small batch orders are welcome. Please get in touch through the website or visit stand V149 at Pure London.

Pure London is the UK's leading trade fashion buying event, representing womenswear, menswear, footwear, accessories and young fashion. The show offers buyers from UK and international independents, multiples, department stores, etailers and mail order, the opportunity to discover collections launching for the season ahead, attend catwalk shows and hear from their peers and other industry experts in valuable seminars and workshops. Pure London is an Ascential event. www.purelondon.com

Cookie information is stored in your browser and performs functions such as recognising you when you return to our website and helping our team to understand which sections of the website you find most interesting and useful.

Strictly Necessary Cookies are enabled at all times for our website to function properly and provide basic security features.  These cookies do not store personal data.

If you disable this cookie, we will not be able to save your preferences. This means that every time you visit this website you will need to enable or disable cookies again.

This website uses Google Analytics to collect anonymous information such as the number of visitors to the site, and the most popular pages.

Please enable Strictly Necessary Cookies first so that we can save your preferences!

Cookies are text files which are placed on your computer or other devices (such as ‘smart phones’ or ‘tablets’) for record keeping purposes.  They make a site more convenient to use by allowing the site to remember important information.  A cookie typically contains the name of the domain from where it originated, the cookie’s “lifetime” and a unique, randomly generated number or value.  If you’d like to find out more about cookies, visit allaboutcookies.org

We use cookies and third party services such as Google Analytics to gather information about your device, browser and IP address, your visit to our website (such as your pages viewed and journey around the site), as well as to track the total number of visitors to our site.  IP addresses allow us to identify the location of users so that we may determine the number of visits we receive from different locations and countries.  It also allows us to block disruptive use where necessary.

We do not use cookies to collect or store information such as your name, address or other contact details.

For more information on how Google collects and processes data, visit the following link "How Google uses data when you use our partners' sites or apps".

In terms of functionality, we may use cookies so that when you return to our website, we recognise you and remember your preferences, giving you a more customised web experience.  Cookies themselves do not typically contain personal information, though in these cases, personal information may be associated with a cookie file.

You can set your browser to refuse or remove cookies although this may cause some parts of our website to not function properly.  Visit allaboutcookies.org for information on how to do this and adjust your browser settings.